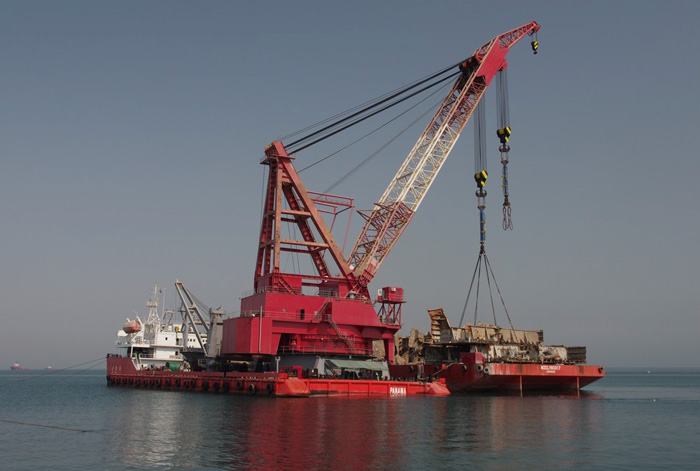 Barge loading cut sections of the tanker on barge for transport to the UAE. 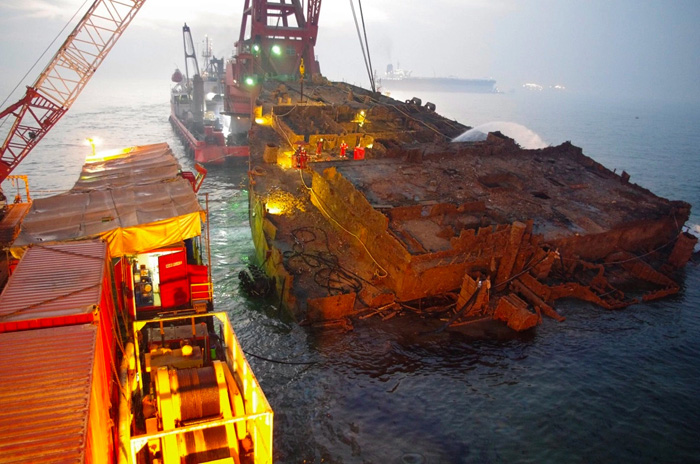 The stern partially floating, being held by the Hong Bang 6 as the team continues working to get her completely afloat. 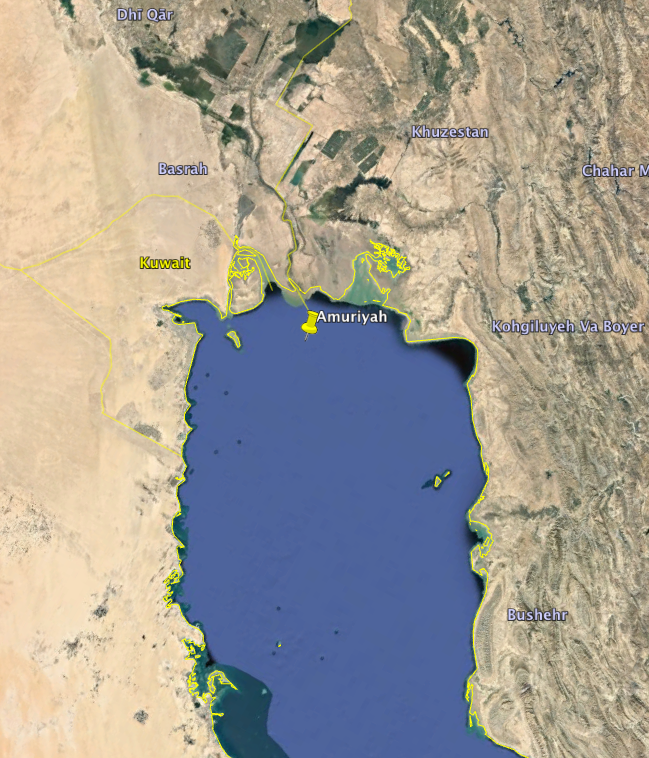 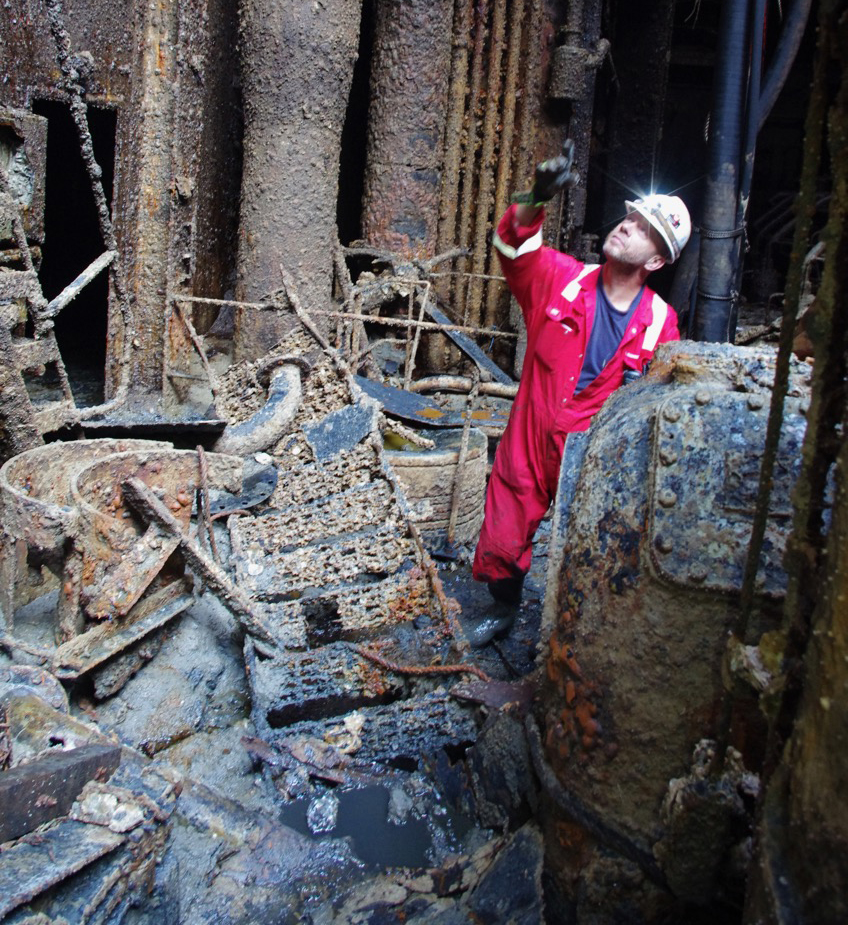 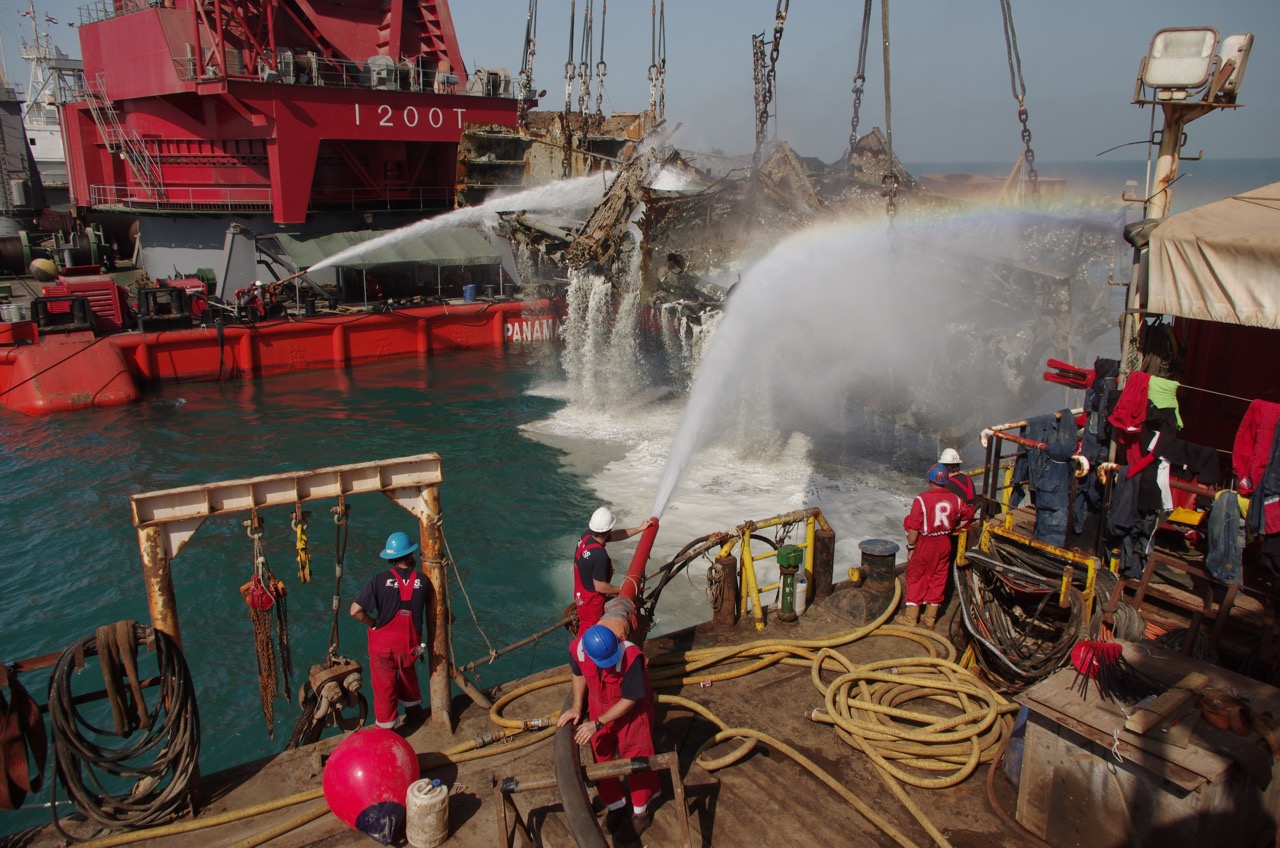 Divers washing mud from a tanker section hanging in the rigging of the barge.

Supertanker Amuriyah burned and sank after being attacked by US Navy jets during the first Gulf War.  The wreck of Amuriyah, on the bottom in 30 meters of water, was blocking part of the loading zone for one of the loading buoys at the Al Basra Offshore Terminal.  In order to regain the lost oil export capacity, the South Oil Company (SOC) of Iraq (part of the Iraqi Ministry of Oil) contracted Mammoet Salvage to remove the wreck in 2014.

The project required mobilization of equipment and people from all over the world.  As the job progressed, conditions proved different, and more challenging, than had been specified in the contract.  As a result, the job suffered many setbacks, including a suspension precipitated by a disagreement over the terms of the contract between Mammoet and SOC.  Ultimately however, the differences were negotiated and the work restarted in August 2016.

Amuriyah was cut into sections of 500 to 700 tons each, using 3-inch stud-link anchor chain to saw through the ship.  The sections were then lifted to the surface where water cannons were used to wash away several meters of mud which had accumulated on the wreck. Removal of hundreds of tons of mud from each section reduced the weight of the wreck sections by 30% or more.

The biggest challenge, however, was the engine room.  The engine room exceeded the safe capacity of the crane barge, so the decision was taken to refloat the stern section, including the engine room and 1,000-ton engine.  The stern section broke the surface in December 2016 after extensive dive work to patch and rig the section.  The refloat involved multiple methods.  The crane Hong Bang 6 provided lift, while external buoyancy tanks, installed on the outside of the hull added buoyancy.  Once the structure broke the surface, large salvage pumps were put in action to dewater the structure.

However, the tanks immediately forward of the engine room proved to be structurally weakened to the point where they would not take the pressure of refloating.  As the team tried to dewater the tanks, the bulkheads began to crack, and the flooding exceeded the capacity of the pumps.  The naval architect and salvage masters discussed options, and decided to cut away the damaged part, and lift it separately once the stern and engine room were safely afloat.

In late December, the team cut away the weakened tank section and the engine room floated free.

The project wrapped up in January 2017.  The final barge loads of scrap sailed for Ras al Khaimah.   Crane barge Hong Bang 6 from China and the accommodations/dive barge Crest Support 1 from Singapore were demobilized and loaded aboard heavy-lift vessels for return to their home ports.  The floating stern section of Amuriyah was loaded aboard the same heavy-lift ship as the crane barge Hong Bang 6 for the voyage to China, where the engine room was scrapped.

Dutch Salvage Master Jan Kalkman, and Belgian Salvage Master Eric Houtteman were on the Amuriyah project from the beginning, and it was their planning and leadership, along with the detailed technical calculations from Naval Architect Han Schiet, which were responsible for the success of the project.  Kalkman and Houtteman are part of the Marine Masters Group, and can be found at www.marinemasters.nl.  Schiet works with Koole Mammoet Salvage in The Netherlands.