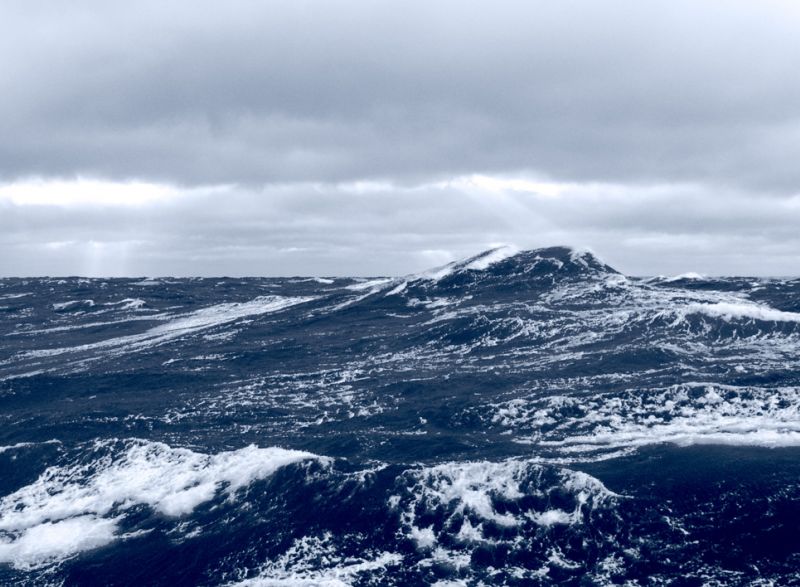 A Blue Norther gale force wind in the Gulf of Mexico 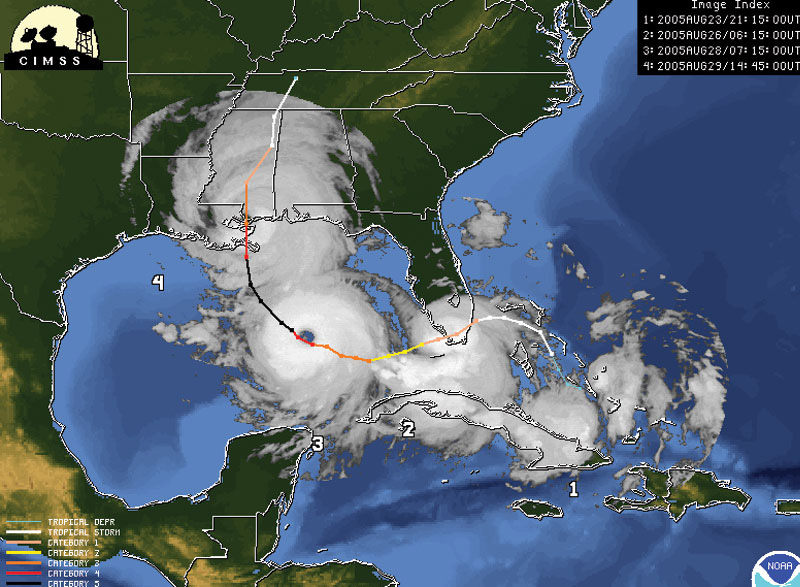 The path of Hurricane Katrina

Daniel Porter went to the Gulf of Mexico in 2005 as captain of the Crowley Barge, CMC 450-10 engaged in Hurricane Ivan(2004) repair and recovery in the Main Pass oil field east of the mouth of the Mississippi.

Soon after arriving, he found himself riding out Tropical Storm Cindy, then a few days later he made tow with a Crowley Invader-class tug, Crusader, and ran from Hurricane Dennis, the first of many hurricanes he would deal with in the Gulf of Mexico.

A few days into his next rotation aboard, Porter and Captain Ward Davis of the Crusader again made tow, this time to run from Hurricane Katrina.  Katrina was about 200 miles behind the tug and tow, then making their best speed, about 7 knots on a southwesterly course.  Katrina gaining at about 14 knots, when the hurricane hooked to the north northeast, flooding New Orleans and making landfall at Waveland, Mississippi.  Porter realized that the race with Katrina had been too close, and set out to learn everything he could about hurricanes, and hurricane planning.

Returning to the Main Pass field, Porter found himself dealing with a logistical and communications nightmare.  All shoreside support had been destroyed, along with communications, leaving only and overloaded satellite phone system.  The Venice, Louisiana logistics base for Noble Energy, the client, had taken a direct hit, and LA 23, the highway between Venice and New Orleans, the only road in and out, had been flooded or blocked by fallen trees, houses which had been lifted off their foundations and deposited on the highway, even shrimp boats and barges which had been carried ashore on Katrina’s 20-foot storm surge.  All of the communities along the route had been destroyed by the wind and storm surge, which drown the orchards, and left the corpses of cattle in the tops of trees.  The town of Buras was typical.  After Katrina passed and the water receded, there was only one standing, heavily damaged structure, the fire station.

While shoreside managers struggled to set up boat and helicopter bases outside the path of Katrina’s destruction, Porter worked on getting fresh supplies of food and water out to the barge, and getting crews relieved.  Many of the crewmen had been stuck offshore in relative comfort while their families were displaced, their family homes damaged or destroyed.  Helicopters had been pulled back, and fuel stocks and air traffic control systems had been destroyed.

Crew boats were the first transportation back in service, but the 20-foot storm surge which has swept ashore like a tsunami, had carried whole houses, trees out to sea with the backwash.

Porter was working on his own relief, when Hurricane Rita, the most destructive hurricane of an extremely destructive season, bore down on the CMC 450-10.  Rita’s path was too far south for the Crusader to safely cross to the “clean” side of the storm, so he maneuvered north east, tucking in as close to the Florida panhandle and rode out the 25-30 foot seas as Rita came through the Florida Straits and began her destructive march west northwest through the oil fields of the Gulf of Mexico.

To complete shoreside operational disruptions, Rita knocked out Crowley’s base at Lake Charles, LA.  Fortunately, the barge was well stocked, and accompanied by an able, powerful and well-run tug, the Invader-class Crusader, with Captain Ward Davis.  Davis and Porter were both veterans of Crowley’s Venezuela operations, and worked well as a team keeping their vessels and crews safe in the chaotic periods during and after the hurricanes.

By the end of the 2005 Atlantic Hurricane Season, all records had been broken both for the number and destructiveness of the storms.  By then, there were well more than 100 oil platforms on the bottom.

In response to the dramatic increase in need for vessels capable of working on fallen platforms, CMC 450-10 was dry-docked at Detyen’s Shipyard in Charleston in June 2006, and fitted with three moon pools, a saturation dive system, a work-class ROV, and an 8-point mooring system.  Over the five years which followed, the barge was constantly employed plugging and abandoning subsea wells, removing wreckage, servicing damaged pipelines- all the effects of the powerful hurricanes of 2005 and 2008.